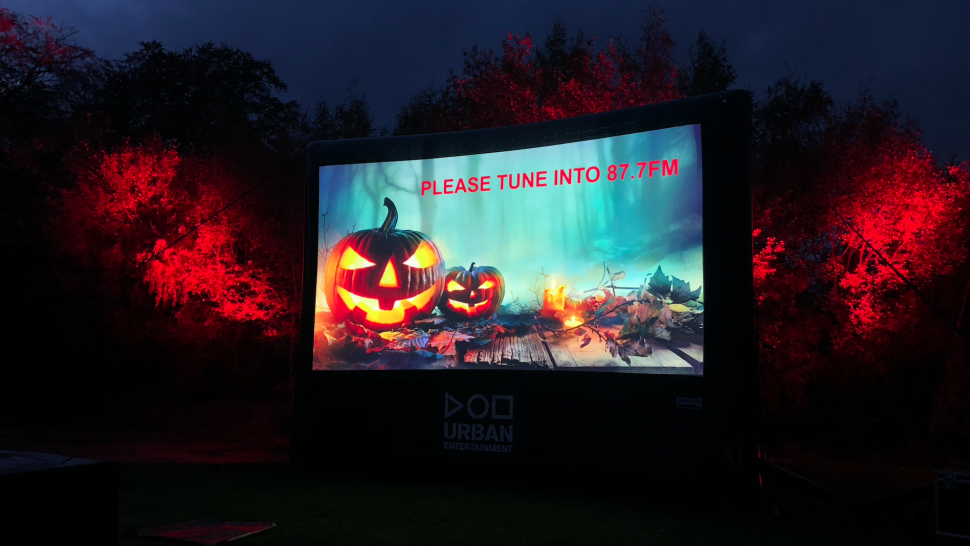 Heading to a Halloween outdoor cinema event this month?

Of course you are! All movie fans know this is a ghoulishly great time of year to enjoy horror films on the big screen.

But debate rages on as to which movie is the absolute finest for the big day. Here we lift the lid on our cream of the crop at Urban Entertainment.

Dating back to 1978, now a worldwide franchise spanning 13 blockbuster titles to date. That’s quite the empire they have created.

The original movie was a sensation and one of the most profitable independent films of all time.

It focuses on a troubled patient, Michael Myers, who was committed for butchering his babysitting teenage sister. Fifteen years later he escapes and stalks another teenage babysitter while his psychiatrist Dr Loomis attempts to stop him.

The impact of the movie changed the horror scene forever. Halloween inspired its many sequels, some of which are being shown back in cinemas around the world this Halloween 2022. Jamie Lee Curtis was the star in her first movie role.
And it also influenced generations of horror films that followed. Halloween outdoor cinema event organisers understandably still love to show the movie where it all began.

Iconic slasher movie Scream (1996) needs no introduction. But did you know it was loosely inspired by a real-life story?

Danny Rolling’s murdering spree where he killed five students in Florida in 1990 is credited with being the basis for Scream.

In the modern horror classic, a knife maniac stalks high school students in suburbia. What was different about Scream was its reinvention of the genre. There was horror, humour and clever twists all mixed together. That’s the reason this choice is still a favourite for Halloween outdoor cinema audiences.

The Exorcist was released in 1974. So there are no horror film cliches here, or gory special effects.

What makes this thriller so terrifying is the sense of tension, unease and sheer terror which lasts for the entire two hours.

Considered one of the scariest films of all time, it follows a young girl displaying odd behaviour after playing with a Ouija board. She is possessed – and audiences have been obsessed with her emotional rollercoaster for nearly half a century.

Every zombie film ever made is parodied in the hilarious ‘rom zom com’, Shaun of the Dead, from 2004.

Lazy antiheroes Shaun and Ed are forced out of their dull existence by a zombie apocalypse. The results are hilarious, with touching moments, and much of the action focuses around their local pub.

This film has a huge cult following and is a sure-fit hit at Halloween outdoor cinema events.

In at number one…

There are a lot of reasons to love The Lost Boys, where two boys discover the horrifying secret of a California town.

We aren’t surprised it is the number one choice for Halloween outdoor cinema events bought to you by Urban Entertainment.

There’s still time to showcase this – or any other – Halloween hit to your audiences.

Get in touch here to discuss our last minute outdoor cinema hire availability.